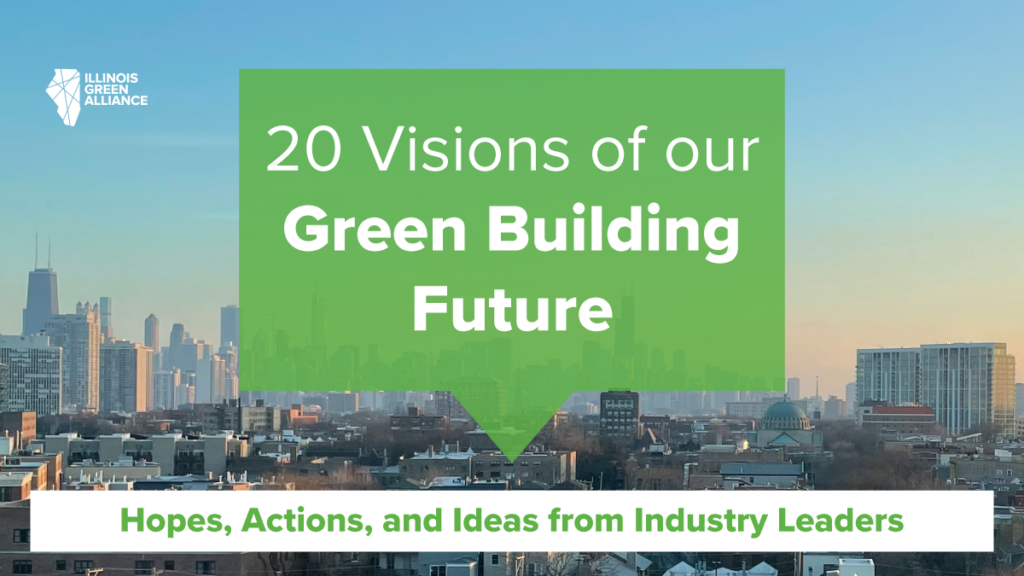 To celebrate Earth Day this year – the year Illinois Green turns 20 years old – we wanted to share 20 visions and goals for the next 20 years from a few of the Illinois Green Alliance members who have helped get us to where we are today.

We hope that you take today to reflect, celebrate, and make a commitment to taking the next step on the path to a net zero future. Our community of green building leaders has shared their visions and hopes for the next 20 years — now, let's make it a reality.

My hope is that in 20 years we will not only have dramatically reduced our carbon emissions across the built environment, but we are realizing our vision for net zero by 2050 and this is no longer seen as a movement but as a reality.

"I look forward to a day, hopefully within 20 years or less, when all buildings, new and existing, are beautiful, comfortable, energy efficient, and use only renewable energy. I hope that we will experience newfound connections where all of us work together to regenerate our communities and ecosystems in a positive and equitable way."

20 years from now they'll look back and say, 'this was the generation that put us on the path to zero.' We have an amazing challenge ahead of us, but the significance of the mission demands it.

"As an organization and a movement, we have come so far, it's easy to discount our successes. Chicago has an internationally recognized sustainability policy framework, has moved to fully divest from fossil fuels and has the highest percentage of LEED and ENERGY STAR® certified office buildings among the top 30 real estate markets in the United States.

That said, we have much to do in the next twenty years to achieve aggressive renewable energy and carbon neutrality targets. We need to continue to influence energy efficiency and healthier buildings outside of the Downtown core and throughout all of our neighborhoods. We must increasingly diversify our leadership, membership and represented constituents allowing all of Chicago's communities to not just claim a seat at the table but to get the political and financial support needed to affect sustainable improvement in the lives of all Chicagoans. We won't be "done" until all of our residents breath clean air, drink clean water, and can live in safe, regenerative neighborhoods. I'm excited to see where Illinois Green goes next and look forward to supporting the next 20 years of our work!"

I hope the green building movement isn’t a movement anymore, it will just be what we do. I hope that it educates by demonstration that green buildings are not only good for the environment, but instrumental for a sustainable economy. We can get there one building at a time if more people join the movement.

"In the next 20 years, my hope for the green building movement is that schools will be leading the way to net zero. There is no one better situated than our youth to advocate for local climate solutions in our schools. We need to encourage youth voice and equip students with resources to create sustainable learning environments for generations to come."

We must prioritize equity, health, wellness, and improved indoor air quality within our built environment. My hope is that in the next two decades collaborators and engineers put all buildings on a path to electrification powered by zero-emission renewable sources.

I hope that in 20 years, green building is just called building — that the environmentally responsible characteristics that reduce the impact of the built environment on the world ecosystems are inherent in every design.

We get there by getting to work. We engineered and innovated our way into this, and we can do the same thing to reverse course. There are so many known strategies, as exhibited by thought leaders that can dramatically reduce carbon now. So let's change industries and practices to embrace at scale what we know now works, and still continue to innovate towards future solutions.

In 2042, Illinois will have led the charge around an inclusive, anti-racist green building movement. We will all recognize that healthy, affordable housing — and the clean energy to power those homes — is a human right. We will get there by partnering with diverse people who live in ALL of Illinois' communities to center reimagined approaches around their cultural wisdom, their hopes, and their dreams. We've come so far in 20 years. Let's collaborate to go farther!

"I hope to see a strong push towards green building advancement at the community level. The green building movement cannot be revolutionary until it is accessible to all and prioritizes individuals and communities that are already feeling the burden of climate change. By amplifying voices of those who have been historically excluded and expanding green building education initiatives across Illinois, I believe we can drive policies that promote healthy net zero communities for all."

Green building will be leading the way for equitable development in all sectors from policy to implementation — addressing the needs of the most vulnerable in our society.

“Illinois has a unique opportunity over the next 20 years to reimagine and reshape the sustainability efforts of today to provide a brighter future for the next generation. Whether it’s an increase in renewable energy components like solar systems, or a greater shift toward electric vehicles, the Electrical Contractors’ Association of Chicago and Cook County (ECA) stands ready to work with partners like the Illinois Green Alliance to provide a brighter and more sustainable future.”

20 years from now the green building movement will have mastered zero carbon, and moved well past thinking about the physical infrastructure of the buildings themselves. The movement will see buildings as the containers that hold our daily lives, and feel a responsibility to create deep impact across transportation, food, community, and all the areas of living, working and playing that buildings host on a daily basis.

"Through design and innovation, the green building movement is making tremendous impact on our planet and for our populations — and we are proud to be a part of it in Illinois. Looking to the future, we hope developers, architects, and managers can work together to create circularity in the built environment. From a standardized measure of embodied carbon in materials and interiors to carbon sequestering / climate positive technologies in construction materials, we are excited for the collective drive towards a net zero future."

I hope that healthy, high-efficiency, circular, zero waste, inclusive buildings are not only commonplace, but accessible for all.

"In 20 years, every new home, multi-family building and commercial building will be built so that it uses no fossil fuels and can be powered by only using renewable energy.  These buildings will require minimal amounts of carbon in its construction. All existing buildings will be retrofitted to significantly reduce their energy use."

We need policymakers to realize the great work our members do and how net zero buildings improve people's lives. Then, we need to build on this work by passing new policy, like a building performance standard, that scales the work of our members so that in 2042 every building is a green building.

"I hope that in 20 years from now, the production and consumption of fossil fuels would have been phased out 100% and there would have been a very natural shift to clean(er) energy. The economic debate about such a pivot would also no longer be a factor, as polluting the environment who have such a stigma both on the cooperate/industry level and also at the human level, that it just became the norm. Similar to how the human race embraced the cell phone 25-30 years ago and now the thought of not having a cell phone is almost unfathomable. It is also my hope and dream, that when we mention the Paris Agreement, it would be mentioned in the same breathe as some of the greatest historical moments in history, that managed to change the course of history for the better.

How do we get there? By continuing to refine, update and upgrade the technology and the human mindset through education, science, and advancements in technology that eventually we couldn't imagine a world without clean energy."

I hope that over the course of the next 20 years, low embodied carbon construction materials will become the new standard through both policy and market driven demand.

"We've already built a solid foundation where Illinois is a leader in green building expertise and advancement. Now, we need to provide the resources so that every building type can get on the path to net zero. The passion, dedication, and drive from our members inspire and motive me to continue this work so that every person can live and work in a healthy space."

Check out our Green Building Resources

Take the next step on the path to zero.